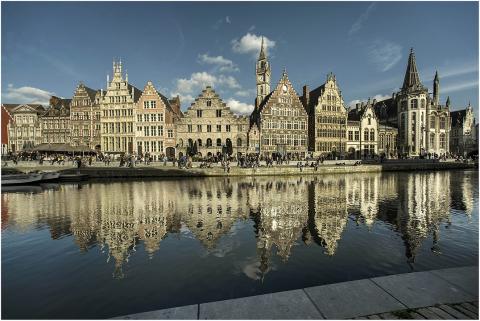 Between 2009 and 2010 I was living and working in Ghent. I learnt to love this exciting city long before I finally moved there. it has a stunning, well preserved mediaeval city centre and in the twelfth century this was the biggest city in northern Europe. Now it is the stage for the Gentse Feesten. This place is packed with fine scenery, beautiful people and lots of excitement. On my racing bike I rode in all directions, using the cycling routes in Oost-Vlaanderen near Ghent, which worked as a charm, leaving me to enjoy the scenery. I became a member of the Unizo cycling team and together in this group we completed in the summer of 2009 the so-called Dodentocht. Ghent is a perfect citytrip - you'll be staying longer than planned, which is even better! More information is available here:

Groen is popular in the city of Ghent, where you see a lot of bicycles. It serves as an example in Flanders and on a national level of how you can keep the city liveable by better regulating traffic. At Sint-Pieters and Dampoort station you can rent bikes at the Cycling Embassy I have cycled about every possible cycle route in East Flanders around Ghent. I was a member of the Unizo cycling team and rode the Dodentocht with the group in the summer of 2009. The back of Ghent has the most beautiful cycling routes along the Leie and the Scheldt. In the Bourgoyen-Ossemeersen you can still find peace and quiet - and Natuurpunt Gent has more information and a cup of coffee for you.